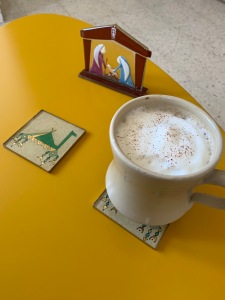 In case there was any doubt in your minds, Ellie is the cook of the house. She has worked in restaurants and most recently at Hurly House, a bakery. It is her outlet for creativity and a stress reliever. Probably a contributing factor to my post marriage weight gain. Over the past week I decided to test the outer limits of my kitchen prowess by making a pumpkin spice latte. Before the mocking begins I should clarify that I needed to buy a whole pumpkin, roast it, blend it, create a spice mix, before even making the coffee. Secondly, I love the pumpkin spice flavor any time of year – even if that puts me in a camp with all of the American suburbian mothers  (My only living experience in the suburbs was less than a year with one of my best friends Andrew and his cousin. They can attest to my lack of domestic qualities and love for holiday food i.e. Little Debbie Christmas trees. Fortunately, they were both neat freaks and often cleaned up my messes. One time Terrence (the cousin) started washing my dishes before I was done cooking). Also, my dad used to make pumpkin pancakes during the holidays (to be fair he still does, I’m just never around) which also contributed to my nostalgia for the flavor. SO, I loosely followed the recipe on attempt one and wound up with a decent starbucks knockoff in taste but with the consistency my dad would call ‘too thick to drink, too thin to plow”. Ellie suggested as strainer for round 2. A few mornings later I went through the process and mashed the pumpkin up more with an immersion blender, strained the mix (loosing most of the seasoning) and put the milky pumpkin combo in my mug. I looked at it with the hunger of Esau but wanted it to be fluffy (frothy) and knew that the fancy blender on a stick could totally do that. 2 seconds later there is pumpkin milk all over the kitchen (and my clothes). Ellie was upstairs in our roof room with her language tutor and my former roommates are nearly a decade in to keeping their own houses clean. The kitchen got a good cleaning and I waited a few more days before making a successful 3rd try Pumpkin Spice Latte. Moral of the story: Worth it.

The Holiday season (for American’s it includes Thanksgiving the end of November up to New years) is certainly a time of year I love. Especially Christmas. When living in Kenya I spent 5 straight Christmases creating many traditions. The first one was fairly lonely but with my friends Chris and Abigail (and eventually their cat, then dog, then son, then daughter) we created some amazing Christmastime traditions. The highlights were leading our church through a Arnold/Covey spectacular spontaneous drama, huge breakfast and dinner, and of course a slip and slide. Last year Ellie and I were in our home culture for our first holiday in the states, together. We got to navigate family and friends and felt loved, supported and included (and surrounded by pumpkin spice flavors).

the stocking were hung…

This year is certainly different than all those. Living in a country that the 25th of December is simply ‘Wednedsay’
and not having people around with whom we have shared Christmas connections is different. As I enter my 7th holiday season being away from home I’m finding the value in doing the little things that give me a sense of joy. On some of my international trips in the last few months I’ve been collecting ornaments, lights and some Christmas decorations (star and lights from Germany, ornaments and stockings from Malta). We have learned through our three years of marriage, living in three different countries, that a feeling of ‘home’ is worth creating. Sometimes its buying butter in Malta because of a potential shortage so you can make the Christmas cookies your family makes every year (Ellie). Or its gathering all the trimmings of a tree around the world so that your house feels right (James). It certainly draws us closer together and we have been able to create a space that feels warm, inviting, safe and yes- Christmasy. So much of this time of year in the states tends to be organized chaos as people run from one party to another (re-gifting the gift exchange item at each one). We have an abundance of calm since Christmas is not celebrated here and some new perspective. For us its prioritizing the things that bring joy. In the absence of the cultural pressures of Christmas traditions we can focus more on the whole point of Christmas and are doing this advent reading together. Don’t forget to reach out to people who matter but aren’t with you – it really makes a difference. We are hosting Christmas movies, possibly a carol sing, skyping friends and family and hopefully will find some people to celebrate with on the day….

2 thoughts on “Taste of Home”